Hello, my name is Alexey, and I am a Developer

My main specialization is Web Development as a Freelancer. Since childhood, I have had a keen interest in programming, and with more than 7 years experience, I have grown my knowledge-base of the Web World. Besides web development, I also like modifying games, doing server administration for Windows and Linux and writing various scripts. I always keep up to date with the latest new cutting edge features to imrove and maintain my development skills.

At the moment, I have knowledge of the following languages:
HTML(5), CSS(3), PHP, JavaScript, working with MySQL databases.

I have experience to work with JQuery, Prototype.

I am getting started with CMS PHP-Fusion, currently working with DLE, Joomla, Wordpress and other engines, including self-written e-commerce online shops, etc. In addition to web development, I also have experience with game projects and game modifications.
The following languages were used: Pawn, Lua, C#, Python.

Currently I am looking for interesting projects that could reveal my potential, use all my knowledge with ability to earn. The most important thing - the ability to create something of my own, contribute to the development of the project. I would like to take part in the gaming projects, creating games. Mainly interested in the game of survival/space theme/strategy genre, similar to indie projects - Empyrion, Rust, Ark, Planetbase, and so on.

Also, recently I began to learn Unity5, did some stuff here, for example my own RTS Camera script, as well as a micro "game" (unpublished). In addition to programming, I have experience in administering game and web servers.

I also can configure the backup copying, logging, writing scripts in shell/batch languages to automate various tasks. If necessary, I can perform a more flexible configuration with the compilation of components from the sources.

According to the game servers, I can install and configure servers that support steamcmd. 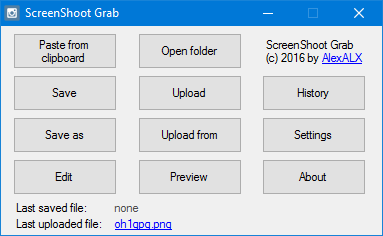 ScreenShot Grab - is small simple program to grab and save screenshots on the computer with the ability to upload in own server or imgur.com service. You can also edit the image via standard windows editor (paint) or specify your own.

More information you can read on GitHub, also you can download program here.

History of creation can be found at habrahabr (russian). Completed work:
* Added new content and slides on main page.
* Some changes in site for seo optimization.
* Various changes in design for better look.
* Other tasks according to client needs. Task:
Develop a site for the sale of cars from America with parsers and modules according to the customer's needs.

The result:
The client was satisfied and received the site according to his criteria and needs.

The confirmation:
You can look the source code at the end of this page as confirmation of the work.

The result:
The client received a working site according to his criteria and needs. Task:
Develop an advanced product filter, with the display of the quantity of the goods depending on the options selected. Modification of other modules by client requests.

Completed work:
* Development of an improved product filter.
* Improvements to the admin panel.

The project of 2015, moved to another platform. Completed work:
* Redesign of profile pages with developing of new functionality according to the client's specification.
* Connection of new payment systems.
* Development of the vacancies category.
* Modifying the admin panel, moderating blogs functionality.
* Registration with confirmation by mail and moderation.
* A lot of other improvements according to the client needs.

The result:
The client is satisfied with the new functionality and work done.

The confirmation:
You can look this profile, I'm listed as a programmer. Completed work:
* Development of the functionality of collections for brands.
* Improving the product filter - multiple choice of options.
* Modifications to the admin panel. Completed work:
* Design improvements.
* Install the adaptive slider.
* Modifications to the admin panel.
* Other minor improvements according to the client needs. I have many years of experience in the development and administration the project of CS 1.6 servers, plugins writing (PAWN language, for amxmodx) and more. Was created unique zombie mode, there also was other servers - deathrun, gungame, classic, deathmatch and so on.

In 2008-2012 years, the servers had big popularity and was full most of time. Servers had a unique plugins and ideas, which still can not be found anywhere else.

Also there was created several maps for this game.

State:
Servers were closed in early 2015 year due to the falling popularity of the game, the development of plugins is also stopped. Since 2009, started making various improvements to Stargate addon of the Garry's Mod game (the lua language). Later created own addon called "Stargate with Group System", which later became part of another addon "Stargate Carter Addon Pack", and then I'm became part of the team and has made a lot of changes and improvements to the addon. Also, almost alone ported addon to the new 13 version of the game (a lot of code changes).

The main work is to write/improve the code, such as the development of Group System for Stargate, multi-language library, a huge number of bug fixes, new features, as well as some simple changes to the models/textures and creating sounds. Also was created owm simple map to show some of addon features (included in addon).

State:
Currently only support working ability of addon when game updates, as well as support the work of my Garry's Mod server. Also had short experience with work on Rust game servers, wrote a unique plugins (C# language) for my servers, own online shop system (with pay using webmoney), a complex leveling system, and several other unique ideas which is now nowhere to be found.

Also contributed to the writing of the multi-language library for Oxide (mod api), the library has not been included, but was taken by developers as a basis for writing their version.

State:
Servers were closed in mid-2015 due to the financial and technical difficulties.

In order to gain experience in understanding the operation of the file system on the "low level" has been developed so-called "ALX Wiremod E2 OS" written in the in-game Expression2 language from Wiremod addon to Garry's Mod game.

This system is not a "real" operating system in the direct sense, but it has a real file system with a 32-bit sector size working at a low level (based on real FAT) with an in-game virtual HDD (in fact it's an SSD), and a virtual CD drive working with virtual CD's using the file system "WCD" also designed specifically for these drives.

In addition, there was created a virtual PC with its similiar BIOS, bootloader, graphical installer of the system, a simple file manager in the DOS style, a disk burning program, and a simple text viewer. Also, the OS can open real BMP files inside the game and display the picture on the in-game "digital display". Task:
Install and configure the server for web studio tios.com.ua on a dedicated server.

Completed work:
* Configuring the operating system.
* Configuring the ISP Manager.
* Installation of php 5.3/5.6 with the ability to switch.
* Setting up a backup to a remote server.
* Moving sites from another server + cleaning up from viruses.